Smartscrolling? Is It a Feature or a Bug? 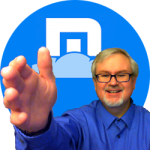